The new transcription of the Austria-Hungary casualty lists is very well received. Time to create a few initial evaluations based on the data!

The first evaluation deals with how well the transcription works with the new method. The new transcription was started after some tests in week 45. You can clearly see the jump to which the new method has led. At the moment we are creating more entries every week than in the previous week. Let’s hope this trend continues!

Next, I looked at how many entries are on one side of the loss list. The first time I looked through the loss lists, it seemed pretty uneven. For the diagram I use a so-called boxplot. You can seen that the majority of pages contain between 40 and 90 entries. On average, there are 70 entries. But there are also some outliers with very few entries up to pages with over 150 entries.

The next diagram shows the distribution of the different types of loss. There are a few more values (returned, missing, fled from captivity), but these are so rare that I did not include them.

About 2/3 of all entries refer to wounded soldiers. The fact that a large part of corrective messages has already been entered (where the nature of the losses is distributed differently) does not fundamentally change this distribution.

If you now look at this distribution by country separately, you notice significant differences:

The individual countries were affected very differently by the losses. Here are the absolute figures for the individual crownlands:

However, this chart is not very meaningful, since it goes without saying that countries with several million inhabitants were also affected by many losses. It gets more interesting when you look at the relative number of losses. As a comparison, the population of 1910 was used:

Suddenly significant differences in the burden of losses come to light. It should be noted that 40% of the entries do not specify a country. If, in certain regions of origin, the information is particularly often missing (because, for example, the place name was difficult to read / write), this and the following diagram would be distorted.

If these numbers are now projected onto a map of Austria-Hungary, further possible correlations become visible:

This map may already provide hints for further historical questions. However, it should be remembered that only about 10% of the entries have been recorded so far. And probably these first 10% of the pages are not representative. The results are getting better and better, the more data of the casualty list are entered.

And here you come into play! Help with the collection of the casualty lists. It is really easy. How to participate and search in the previously collected data can be found at http://verlustlisten.at 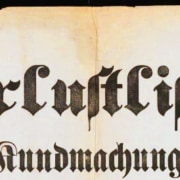